Umbria is perfectly placed in the middle of Italy. This means you can get to practically anywhere in Italy with relative ease. The weather is hot and mostly dry between May and Oct inclusive with temperatures rising from 28 degs C average in May and Oct to 38 degs C in mid August. Nov is usually a sunny, warm month with crispness  in the morning and the evenings and temperatures around 20 degs C during the day, dropping to about 8 degs C at night. In Dec, Jan and Feb, the temperatures can sometimes drop to about 5 degs C  at night and 10 – 15 degs C during the day. All around the year, we have blue skies and plenty of sun-shine, though, in Dec, Jan and Feb, when the sun is at its lowest point, not everywhere gets the sun. Spoleto, (and, Foligno, just 7 miles up the road), is betwixt the Appenines and the Sibbiline mountains – 2 of the biggest mountain ranges in Italy. Our nearest ocean is the Adriatic eg San Benedetto or Rimini. And, about 4 hours away by car is Cinque Terra and, a bit further, Portafino – both on the Riviera.

By basing yourself in Spoleto, however, not only do you get the benefit of living in a thriving, quintessentially Italian town, set in the most amazingly aesthetic context, but, it is very easy to access the whole of Umbria within hours, not to mention the rest of Italy. If you like travelling, then, using Spoleto as your base ticks all the boxes ! On the other hand, if you prefer to live in a smaller, but, still vibrant town, then, choose Foligno, a very charming market town. During the 2nd world war, Foligno was badly hit on its outskirts. However, the centre of Foligno is still extremely beautiful. It has been pedestrianised. Italians love it. And, the place has edge !!! It is also packed with cultural activities and monuments – see Museo Trinci for instance. So, ignore anything you read in a guide book. Those writers haven’t been here recently ! A quick scan should give you an idea; but, this is just a rough guide : by car and, given normal driving conditions, from central Spoleto, it takes 90 mins to Rome (quicker by train), 15 mins to Assisi, 35 mins to Perugia or Orvieto, 2 hrs 30 mins to Florence, 3 hrs 30 mins to Naples, the Amalfi coast and Pompei. And, Castelluccio (great restaurants in this tiny hick town!), perched on a hill looking across at the famous Gran Piano (with fantastic natural flower displays across this gigantic plain around about Easter) is just over 1 hour away. On the way to Castelluccio is Norcia, which is worth a visit and where most of our white truffle is to be found (our area is abundant with black truffle all the year round – consequently, it’s cheap to dine out on truffle, one of my favourite dishes, at around 10 euros for a bowl of ciriole al tartufo !).

It is worth noting that most of the places further than 1 hour by car can be quicker to get to by train and it can be a lot less hassly eg taking a car into Rome or Naples would not be everyone’s first preference and Spoleto train station provides an excellent and regular service to almost everywhere you’d wish to go. However, if you want to stick to Umbria, and, this is well worth doing if you are only in Spoleto for a week, then, apart from the “hot-spots” of Asissi, Perugia, Orvieto, Trevi and Montefalco, there are an abundance of other small towns eg Todi, Spello and Gubbio which are all equally beautiful and fascinating. Benigni (the Oscar winning film-maker of Life is Beautiful and Piccochio) stays in Coliscipoli while working in the film studios in which both these films were produced. And, of course, it is the countryside in these parts that features in both these films. 1½ hours away is the relatively undiscovered plain of Rieti. Here, you will find the original worship places of St Francis, in tiny monasteries dotted around. Some of his “churches” in this area are to be found outdoors, a simple assembly of wooden benches and an alter beneath the trees.

St Francis lived in this area when he first left his privileged existence in Rome to spread a less conventional Roman Catholicism in the rural areas of Umbria, before settling in Asissi, and there are numerous monasteries round about, where he has stayed, all within a 30 – 60 min radius – 1 of them is in Greccio by foot, where St Francis went to live after he and the Catholic church parted company (about 1 hour away). There is a map at Greccio which shows how to get to 5 or 6 others by car or on foot. And, Max, at the Spoleto tourist office (speaks perfect English) would be more than happy to enlighten you.

Last, but not least, is 10C San Mamiliano, the oldest inhabited village in Umbria, where we lived until recently, when we moved to Spoleto to be nearer to the majority of our apartments. This tiny, walled fortress, with its fifteen or so Italian inhabitants, whose history embraces a time when the Pope used to stay here (San Mamiliano marks part of the boundary of the Vatican state), is perched just below the snow line, often above the clouds, on a hill that faces the Apeninnes and that overlooks Ferentillo in the valley below. If you visit the tiny Italian community of San Mamiliano, please mention our names in the village and you will be responded to as one of the extended family ! If you are interested in the local art, then, in all of the numerous churches in every tiny hill-top village, as well as every town and city, there are frescos, most of which have been restored. Indeed, the church in San Mamiliano (see our other apartments : Il Castello and L’Arco) houses one of the 4 most important paintings in Umbria, which the Bishop of Spoleto is currently trying to “pinch” but, alas, it is being neglected (which is his argument for taking it to join the others in the Spoleto duomo) and the frescos have remained unrestored – I suppose, it was decided to put the money into completely restoring San Mamiliano instead. Most of the other villages with beautifully restored churches have been left to just totally crumble.

As well as the prestigious Spoleto festival featured in the Bigitte Bardot film based on her young life as a star, there are many other big festas that take place all over Umbria, ranging from the less prestigious, but still spectacular, festival at Todi (Spoleto’s unofficial rival), the specialist Flower festivals at San Gemini and Spello, the Water festival at Piediluco (all within 1 – 2 hours), Ferentillo’s historic Pageant, involving 400 volunteers and showing life in Ferentillo over the last 1000 years…..as well as hundreds of more modest festas where you can dance, eat and drink all night and it will cost you practically nothing. Italians know how to love life to the full! Further information on any of these festas can be got off the internet or from the tourist offices in Spoleto. 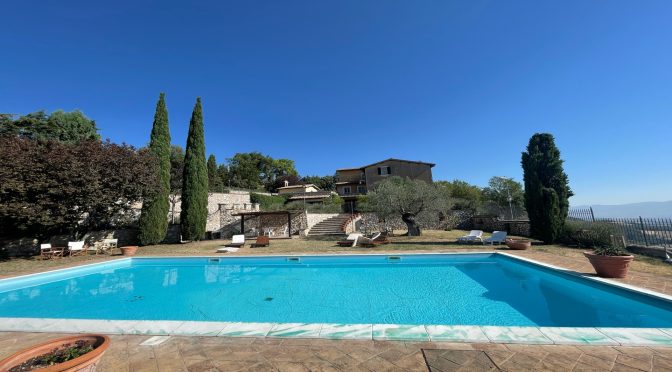 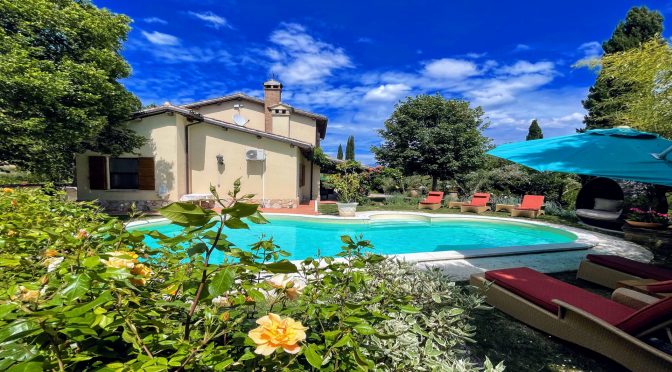 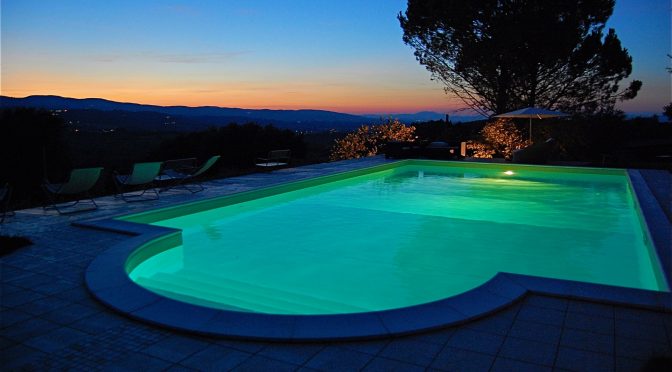 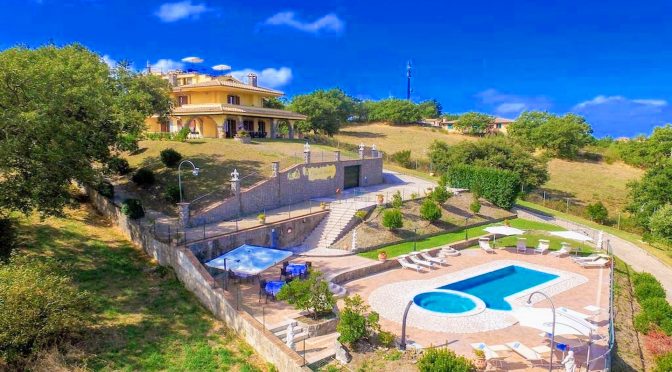 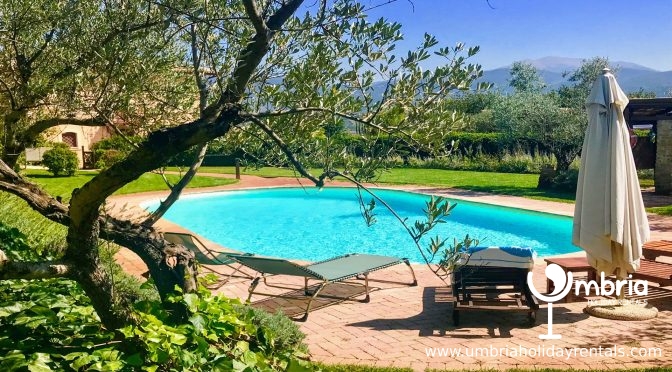 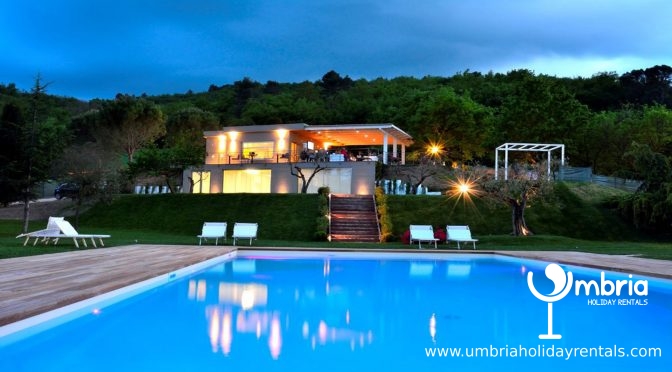 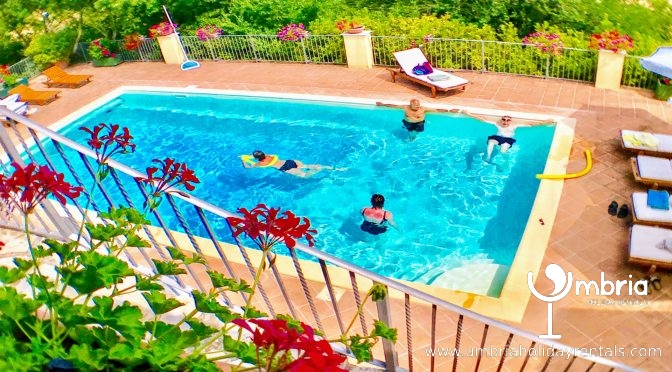 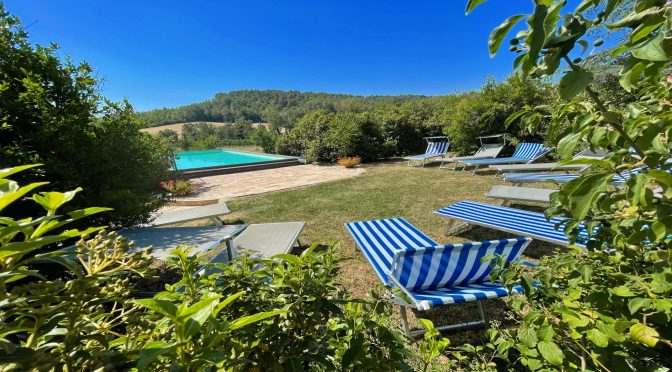 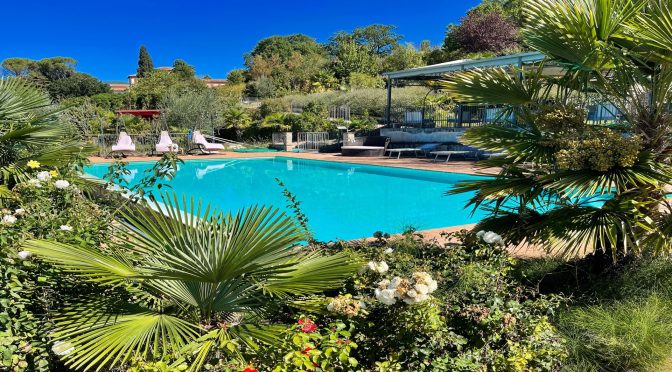 SPOLETO-POOLSIDE-SLPS-24 in 6 apts, each sleeps 4 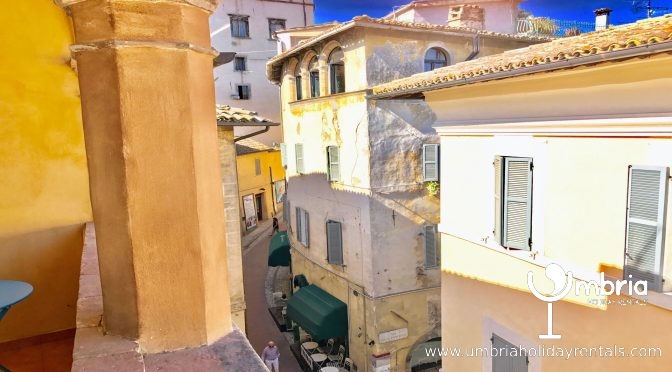 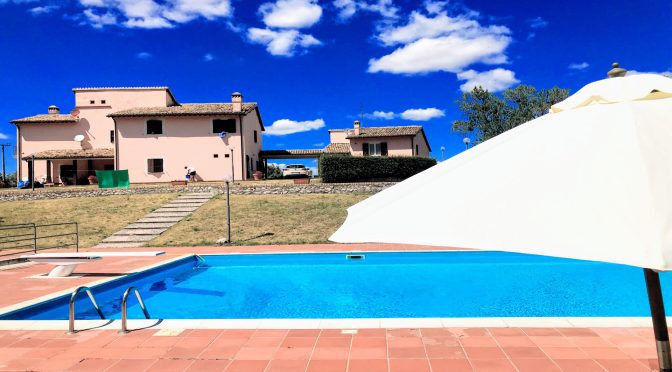 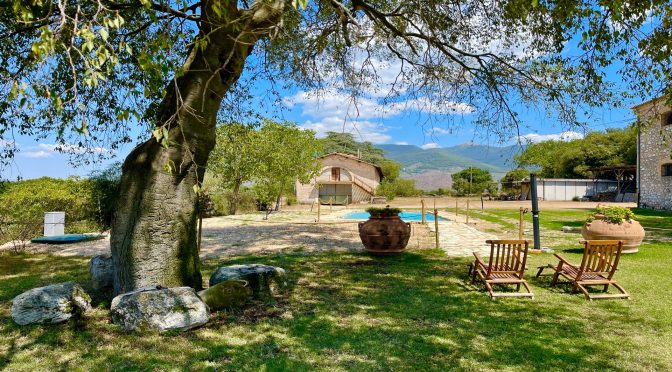 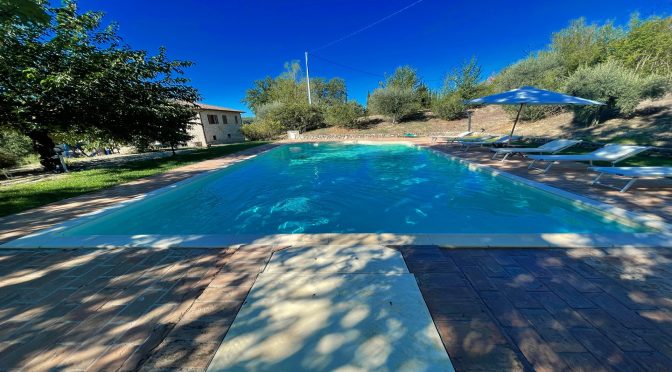 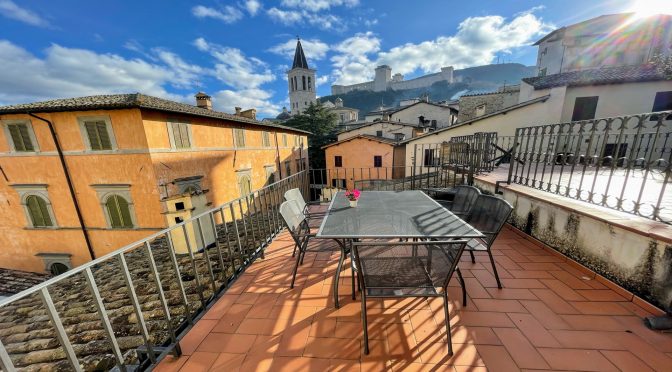 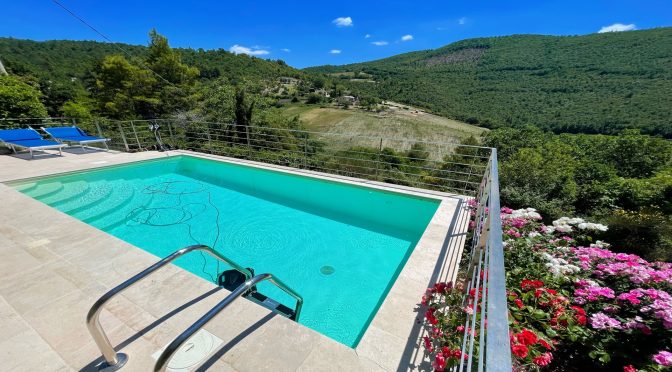